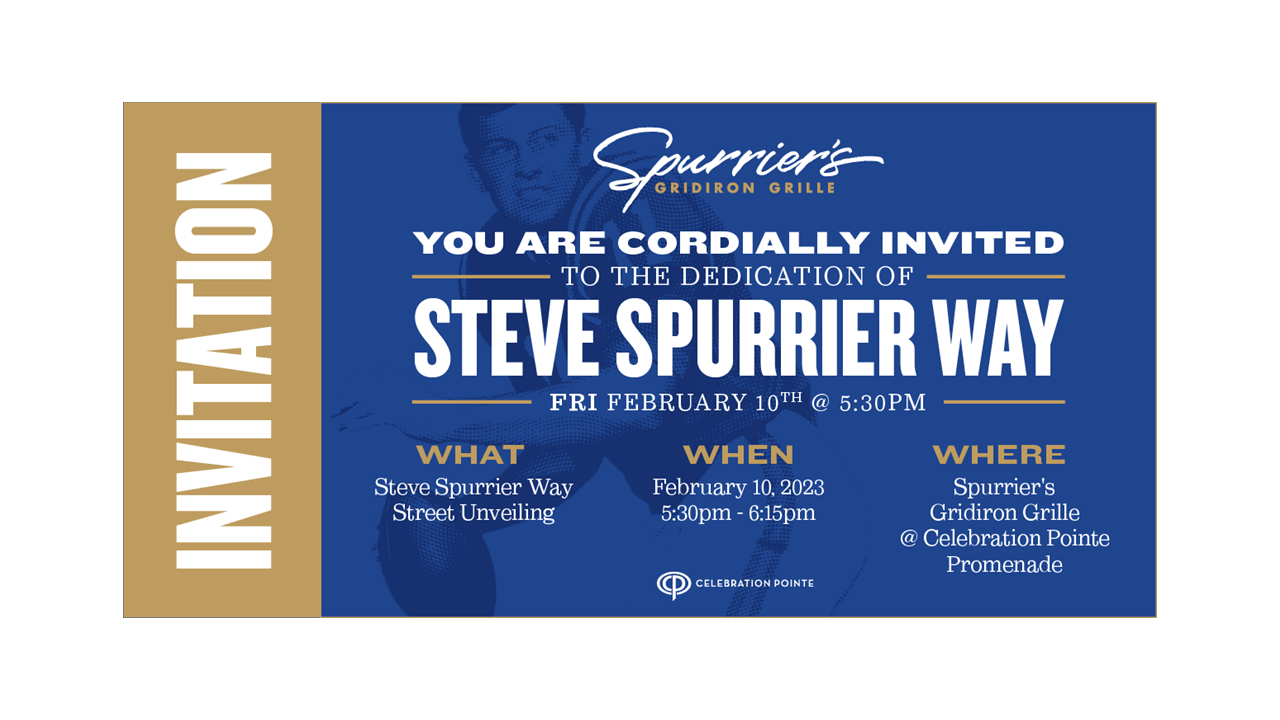 The Gators legend’s name will ring in the streets

To honor a Florida legend, Steve Spurrier Way will be officially unveiled on February 10, 2023, at 5:30 pm at the promenade in front of Spurrier’s Gridiron Grille in Celebration Pointe.

In 1966, University of Florida Quarterback Steve Spurrier won the school’s first Heisman Trophy, beginning the legend of the kid from East Tennessee who would become the most revered name in Florida football history.

“This is a great honor and I want to thank the Florida Gators, Celebration Pointe, and my team at Spurrier’s Gridiron Grille for making it happen. Only the best coaches, like Don Shula, Bobby Bowden and Coach Fulmer in Tennessee, usually get this honor, and I’m glad to join
them” says Spurrier.

After a professional career with the San Francisco Forty Niners and the Tampa Bay Bucs, Spurrier began his coaching career with Ray Graves’ Gators in 1978. After stops with Georgia Tech, Duke University, and a run with the Tampa Bandits of the USFL, Steve came home to what he would christen as “The Swamp.” What followed was 12 years of dominating football  that made UF a national powerhouse, including a National Championship, 7 SEC Championships, Florida’s second Heisman Trophy winner, and a 122-26-1 record.

After a short stint in the NFL, the HBC went to South Carolina and built their football program to heights they had never seen. He led the Gamecocks to their first 11-win season, the first top 10 finish in program history, and became the only person to hold the record for most wins at two Power 5 schools.

Over the past few years, he’s been building a new type of program, as he and local businessmen have developed a restaurant and museum, unlike any other in Gainesville or Alachua County. Spurrier’s Gridiron Grille is a destination for Gators fans, Gamecocks fans, fans of college football, and fans of great, farm-to-table food. In only 18 months, the restaurant, located in Gainesville’s Celebration Pointe, the premier place to live, work, and play in North Florida, has become one of the busiest and most successful restaurants in the nation.

Steve Spurrier Way will run through the heart of Celebration Pointe, just as the legend himself runs through the heart of Gator Nation. On hand to celebrate the street unveiling will be local and state dignitaries, as well as many Gator legends, including Coach Spurrier. The event is
open to the public.